ABOUT THE PROJECT‑
​CHASING THE NEW WHITE WHALE—Harpooning Addiction— is an art & advocacy model created by Michael Gorman dedicated to bringing awareness to the issue of opiate addiction in the commercial fishing community of New England and beyond.

​Through an evolving series of environmental installations, readings, presentations, and performances, and through direct engagement with the community, Gorman and his production company The Forty Hour Club have created a new model of theater—an innovative “tool” with which to “Harpoon Addiction”.

This unique arts & advocacy model, based upon the revolutionary 19th century invention of the “toggle” harpoon, draws parallels to both the insidious nature of addiction and the resourcefulness needed to “harpoon” it.  Gorman’s work on this project explores the current National opioid crisis through the unique lens of the commercial fishing industry, and draws inspiration from Moby Dick and Ahab’s obsessive pursuit of the Great White Whale.
​
"CHASING THE NEW WHITE WHALE—Harpooning Addiction"  is aimed at addressing the opioid crisis head-on, and Gorman's goal is to take the project on the road to working communities hardest hit by the epidemic.  Through direct engagement with the community, the model combines theater, performance, multi-media installations, outreach, and advocacy that together address the opioid crisis that is taking place in those communities.

By presenting the performances in non-traditional “venues”, such as locations in and around working waterfronts, and through direct engagement with the community (Gorman often includes members from local addiction & recovery groups in the performances), this art & advocacy model has the unique ability to creatively connect with the individuals and working communities being devastated by the opioid epidemic.

​With this project, Gorman hopes to engender a greater awareness of the epidemic and the underlying disease of addiction; create connection and engage the audience and community in a creative dialogue that propels constructive change; emphasize the need for more understanding and compassion; help reduce the stigma associated with addiction; and help initiate healing.

Gorman’s personal interest in this project grew from his own family history with opiate addiction (his brother, Kevin, a commercial fisherman, died of a heroin overdose), as well as from his two-decades long work on his trilogy of plays—THE HONOR AND GLORY OF WHALING.  Gorman’s newest play CHASING THE NEW WHITE WHALE is a continuation of this project and work, and features a mythical chorus of ghostly whale hunters and modern day commercial fishermen inspired by Ahab's stowaway crew—"Fedallah and the Phantoms"— who represent those who are often “invisible” in our society—the addict; our abandoned and alienated working communities; the marginalized. Through this new play, and the role of the CHAPLAIN—played by the playwright himself—Gorman hopes “to speak a word for addicts”, and use his pulpit to effect meaningful social change. This project is not simply about personal sadness and loss".. says Gorman.. "it is about a regional and National health crisis and an artistic call to action.  It is not intended to be my plaintive voice but the echo of the over 70,000 lives lost to opiate addiction each year."
The project will be touring New England in 2021.  More details HERE.
Watch a short video about the project— "Chasing The New White Whale- Harpooning Addiction"

After all, what was Ahab, but an addict really, and what was Moby Dick but an allusion to opium, and heroin, its contemporary scourge.”
— M. Gorman 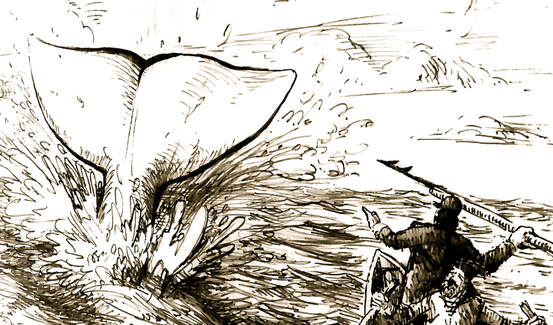 Artwork by Dan Daly: "The Chase"
ABOUT THE PLAY‑
​Chasing The New White Whale
The centerpiece of the project is Gorman's new play "CHASING THE NEW WHITE WHALE"— which premiered in ​The Ellen Stewart Theater at La MaMa in New York City where Gorman serves as the Playwright in Residence.  The play made it's debut run from November 24 – December 9, 2018.

In this ambitious new production—using Melville’s 19th-century monster as a metaphor for the modern plague of opioid addiction, Gorman explores the ruinous effects of the opiate epidemic on the commercial fishing industry.  Inspired by Moby Dick, and drawn largely from his trilogy of plays "The Honor and Glory of Whaling", CHASING THE NEW WHITE WHALE follows the plight of legendary New England fishing Captain Robby Foerster and his boat The Northern Star as he falls deeply into addiction after a fateful first encounter with heroin.  The play connects Robby's addiction with Ahab’s obsessive pursuit of the Great White Whale, and reimagines Captain Ahab's final thrilling chase in Moby Dick. "After all, what was Ahab, but an addict really, and what was Moby Dick but an allusion to opium, and heroin, its contemporary scourge."

Featuring a mythical chorus of ghostly whale hunters and modern day commercial fishermen inspired by Ahab's stowaway crew—"Fedallah and the Phantoms"— CHASING THE NEW WHITE WHALE explores theater and the current National opioid crisis in the elemental way the Greeks once did, and takes us to the true “place of seeing". Through the voice of the CHAPLAIN—a character based upon the Chaplain in Moby Dick, and played by the playwright himself—the play also makes a powerful arts and advocacy statement about the devastating effects of the opiate epidemic on America's working communities and the desperate need for more treatment and education. More about the play HERE.

"Gorman sees himself as an everyman playwright with working-class sensibilities. He wants to create art 'about the chorus of invisible people' whose stories are not told on stage. 'A voice in society, that’s something that’s been denied addicts and
​working-class people. I want to tell their stories,' he said."
—National Fisherman Magazine (Dec. 2018)--
Our Art & Advocacy Model In Action:
Watch a short documentary about a recent collaborative performance/outreach event in Belfast, Maine.​
"Phantoms" Tell Their Stories On Stage in a Performance of "In Ahab's Head—Chasing Phantoms"
(Watch the full video below).

“It just connects with the fishing industry and every bit of it is exactly how it is.....How the drugs interplay with fishing, and the lives and the people it destroys. I know, I was in that sad, deep, and dark place for years until I pulled my way out of it. I think of the friends in this industry that I have lost.”
—Response from Robbie Roberge—a commercial fishing captain and recovering addict after attending a performance at Portland’s Fish Exchange (Portland, Maine) 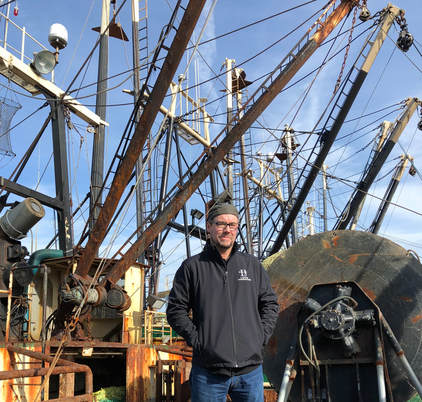 Chasing The New White Whale is an on-going project dedicated to bringing awareness to the issues of addiction
​and recovery ​within the commercial fishing industry and other working communities.

The Forty Hour Club will be producing many exciting events in association with this project.
Please check our event calendar, sign up to receive our newsletter (below), or contact us for more information.